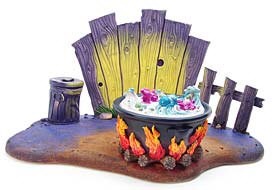 WDCC Trick Or Treat Base

Trick Or Treat Base

Specially designed base, featuring Witch Hazel's cauldron, to display the Trick or Treat sculptures.
Base does not include a Certificate of Authenticity(COA).