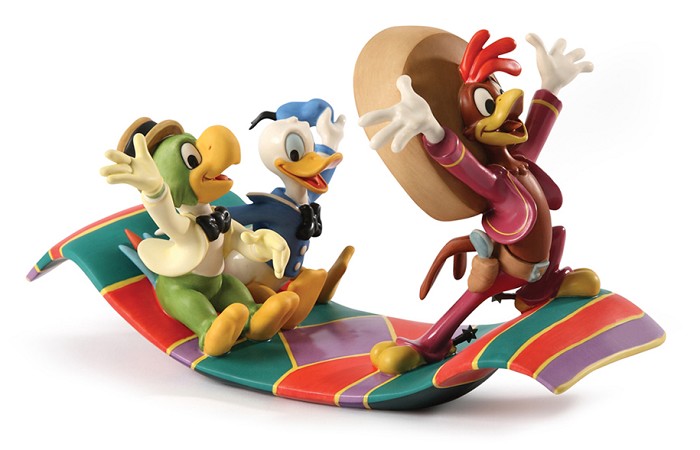 That quixotic quackster Donald Duck journeys into South America with dapper Jos" Carioca from Brazil and ebullient Panchito the Mexican rooster as his tour guides. Panchito graciously invites his two amigos to accompany him on "a nice little trip to Mexico on the magic serape." This multi-colored magic carpet sweeps the birds-of-a-feather trio over the beautiful land of song, dance and romance. Panchito, Jos" (who was introduced in Saludos Amigos) and Donald were animated throughout The Three Caballeros by, among others, Ollie Johnston, Ward Kimball and John Lounsbery, so itï`s obvious Walt Disney wanted his most magn"fico talent to bring these animated stars to the screen. Plussed with pewter spurs on Panchito and a pewter ribbon on Donaldï`s hat, this muy grande sculpture embodies the fun and fiesta spirit of this animated carnivale of animated delights