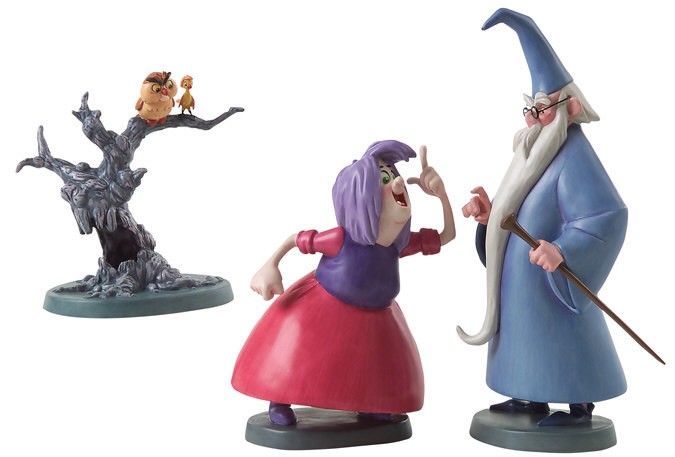 THE SWORD IN THE STONE MERLIN ARCHIMEDES WART AND MADAM MIM

In the churchyard of a cathedral in London a sword appears imbedded in a stone, inscribed: "Whoso pulleth out this sword of this stone and anvil is rightwise king born of England." Although many try, no one can budge the sword from the stone. Deep in the dark woods, kindly but absentminded Merlin the Magician begins to teach 11-year-old Arthur, who is called "Wart" and who lives in the castle of Sir Ector where he is an apprentice squire to burly, oafish Sir Kay when he is not washing mounds of pots and pans in the scullery. By being changed by Merlin into various animals, Wart learns the basic truths of life, but he also runs into the evil Madam Mim, who tries to destroy him. Merlin and Mim have a wizard's duel during which each changes into various creatures, with Merlin using his wits to win. On New Year's Day a great tournament is held in London to pick a new king. Wart, attending as Kay's squire, forgets Kay's sword and runs back to the inn to get it, but the inn is locked. Wart, seeing the sword in the stone, innocently -- and easily -- pulls it out. When the knights marvel at the wondrous sword and question where he got it, Wart has to prove himself all over again, and again he pulls the sword from the stone. Wart is proclaimed king by the marveling warriors. Wart as King Arthur is apprehensive of his ability to govern, but Merlin returns to reassure him.