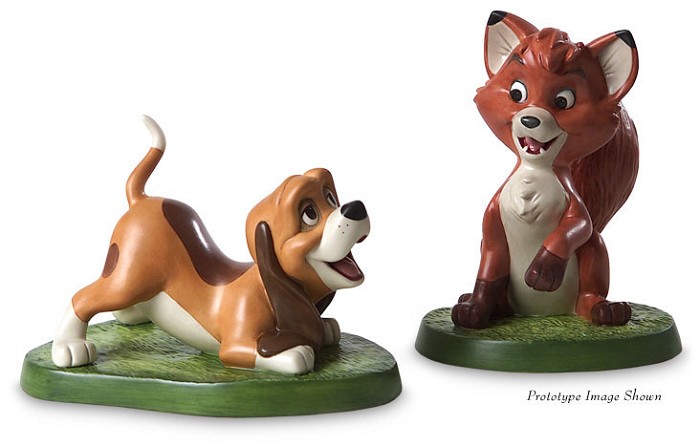 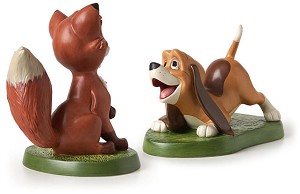 Title: The Best of Friends
Size: Copper 4"; Tod 5"
Particulars:
Celebrating their 25th Anniversary in 2006 comes the first release from Fox and the Hound featuring Copper and Todd.

The animated story of two friends who didn't know they were supposed to be enemies. Tod, an orphaned baby fox raised by Widow Tweed, is best friends with Copper, a young hunting dog. When they grow up, Copper learns to hunt and discovers he must pursue his friend. Tod is taken to a game preserve for safety, and there he falls in love with Vixey, a beautiful female fox. Copper and his master hunt Tod in the preserve, but when the chips are down, Tod and Copper realize that their friendship overcomes all.

Amos Slade: Amos Slade is certainly one of the most problematic Disney characters. A vicious old hunter with a permanent scowl, he believes that the only good fox is a dead one. In fact, the only time Slade allows himself anything friendlier than a frown is when he and his two dogs are returning from a successful hunting trip. That's when he bursts into song, explaining to the world the ethos of his life: "I ain't got no job. I'm a huntin' man and I'd rather have a dog than a dollar."

Slade looks the part: Clad in a fur-lined leather jacket and vast leather boots, he has thick, messy hair and a belligerently bushy moustache. The expression in his eyes vacillates between anger and hatred. His chin juts forth with all the power of a battering ram. And for approximately 80 of the movie's 83 minutes it seems that Slade is utterly incorrigible, bullying, foul-tempered, and intent only on massacring the wildlife. However, in the closing moments, his dog Copper's late-discovered loyalty to his childhood friend opens Slade's mind to the higher emotions. One hopes he will continue on his newly discovered course.