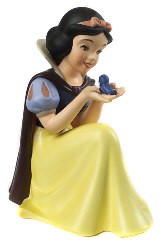 WDCC Snow White Won't You Smile For Me

Particulars:
This year's membership gift captures the lovely princess as she comforts a little bluebird alone in the forest. It's the first time a princess has ever been featured as the Membership Gift sculpture, and she is symbolic of all the wonderful Disney films that began with this beloved character.