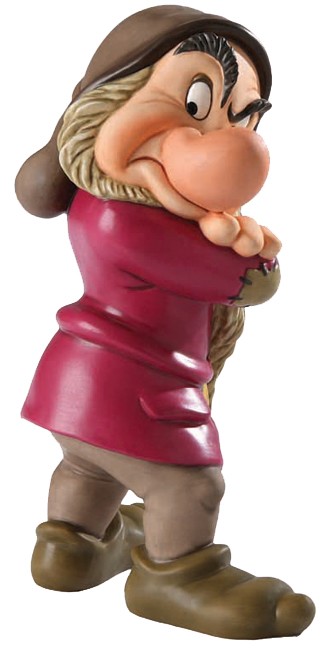 'Get Grumpy' Premiere Event Sculpture and Fifth Release in the Disney Artist Series.

Of all Snow White’s seven little men, Grumpy has perhaps the most complex personality. Wearing his cantankerous heart on his well-worn sleeve, this diminutive diamond miner claims to dislike wimmin, but he gradually comes to love the little princess. Grumpy wears dull magenta colored jerkin,noted Walt Disney, which somehow seems to brand him as an irritable old ‘wet blanket.’ You’ve no idea how crotchety he can be, and yet, much to his own disgust, he has a very soft heart under this exterior crustiness.” Capturing all of Grumpy’s grouchy personality, this humorously xpressive sculpture shows why this lovable crank is the most memorable of the Seven Dwarfs.