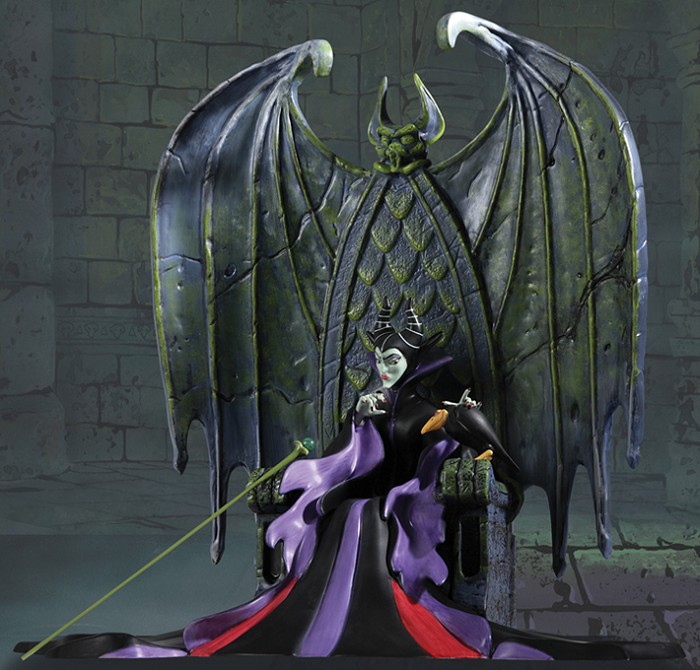 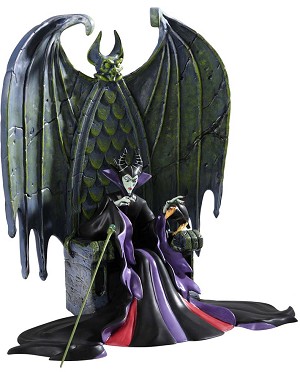 Celebrating the triumph of evil, Maleficent gazes upon the ghastly scene with her devious pet raven Diablo, serenely confident in her complete domination as the Mistress of All Evil. One of Walt Disneyï`s most powerful villains, Maleficent is the dark force in Sleeping Beauty whose nefarious spell subjects the beautiful princess to endless slumber. The Disney animators designed this wicked fairy to resemble a vampire bat, and so it is fearfully fitting that her magnificently malevolent throne has a macabre bat-wing motif. This elaborate sculpture (plussed with bronze hands on Maleficent and bronze legs on Diablo) shows Maleficent at her most sinister" unaware that her vile victory will soon be challenged by noble Prince Phillip.

Betrothed at birth to Prince Phillip (the son of a neighboring king), the infant Aurora is blessed with the gifts of beauty and song by the good fairies of the kingdom. However, fate's icy hand brings an uninvited guest to the christening and the evil fairy Maleficent curses the child to die by the prick of a spinning wheel's spindle before her 16th birthday. Struggling to prevent this catastrophe, the good fairies hide the princess in a secluded cottage in the glen. The years pass and Aurora blossoms into a lovely but lonely young woman unaware of her real name and birthright. Playacting with the forest animals at what it might be like to meet a prince, Princess Aurora, now called "Briar Rose," meets a very real "peasant boy." Although neither of them knows who the other is, the couple falls in love at first sight. When the good fairies reveal Princess Aurora's birthright to her, instead of joy, an awful sadness comes over her. For she believes she must sacrifice her true love to the "right and royal duty" of marrying Prince Phillip, a stranger. Just as she's about to discover that the two are one and the same, she's stricken by Maleficent's terrible curse. All seems lost but for one glimmer of hope ... only true love's kiss can wake this sleeping beauty from an eternal slumber.