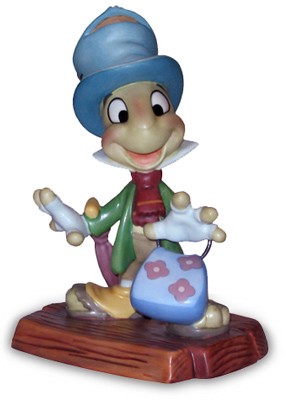 WDCC Pinocchio Jiminy Cricket I Made Myself At Home

Pinocchio Jiminy Cricket I Made Myself at Home

Plussing:
Bag Handle: Bronze.
Particulars:
.Who better to help celebrate the 10th Anniversary of the Walt Disney Collector's Society than Jiminy Cricket from the beloved film "Pinocchio" (1940)? Appearing in 1993 as the original Membership Gift Sculpture, the little cricket with the big personality is back by popular demand. .Jiminy Cricket was the Member Gift Sculpture for those collectors who joined and/or renewed the Walt Disney Collectors Society in 2003.