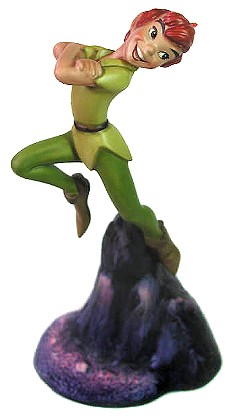 As an option you may also pay for WDCC Disney Classics Peter Pan Nobody Calls Pan A Coward using Paypal Checkout. Please note that all orders must be delivered to a physical address verified by Paypal. This PayPal option is not applicable to orders to be delivered to Military or International orders.

Plussing:
Anniversary Backstamp: A special gold message '40th Anniversary' was added to the backstop of sculptures crafted in 1993.
Peter's Knife: Handle is gold-plated, blade is silver-plated and sheath is bronze-colored.