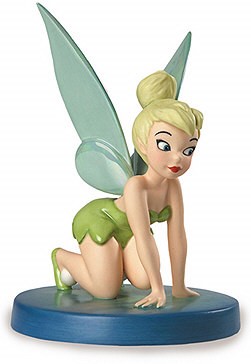 Wings: Opalescent Paint.
Particulars:
Tinker Bell is one of the first introductions from the "In the Spotlight ... Quintessentially Disney" Collection.
Sculpture includes Character Model Sheet. The Model Sheet will show a variety of poses for the character including the pose the piece was inspired by.
An edition size of 300 had a special backstamp (pictured below) of Tinker Bell waving her wand over the WDCC logo that was done for Flicks of Hollywood for a special event they had in 2004. The outer box also contained a special gold sticker.