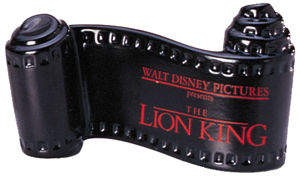 Suspended 12/11.
Particulars:
The Opening Title features artwork from the opening credits of each film and/or animated short.