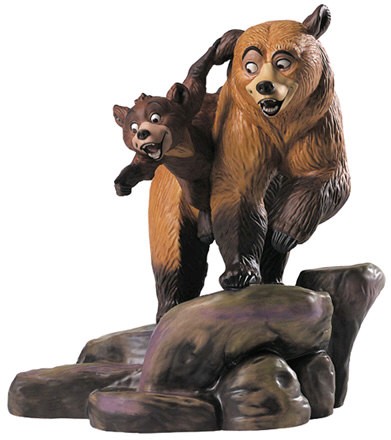 As an option you may also pay for WDCC Disney Classics  Brother Bear Kenai And Koda Brotherly Time using Paypal Checkout. Please note that all orders must be delivered to a physical address verified by Paypal. This PayPal option is not applicable to orders to be delivered to Military or International orders.

The film is set in a post-ice age North America, where the local tribesmen believe all creatures are created through the Spirits, who are said to appear in the form of an aurora. Three brothers: Kenai (voiced by Joaquin Phoenix)- the youngest brother, Denahi (voiced by Jason Raize)- the middle brother -and Sitka (voiced by D.B. Sweeney)- the eldest brother, return to their tribe in order for Kenai to receive his sacred totem, a necklace in the shape of an animal. The particular animal it represents symbolizes what he must achieve to call himself a man. Unlike Sitka, who gained the eagle of guidance, and Denahi, who gained the wolf of wisdom, Kenai receives the bear of love, to which he objects, stating that bears are thieves. He believes his point is made a fact when a bear takes some salmon. Kenai and his brothers pursue the bear, but a fight follows on a glacier, during which Sitka giving his life to save his brothers, although the bear survives. Vengeful, Kenai heads out to avenge Sitka. He chases the bear up onto a mountain and kills it. The Spirits, represented by Sitka's spirit in the form of a bald eagle, transform Kenai into a bear after the dead bear's body disappears. Denahi arrives, mistaking Kenai for dead, and believing the bear is responsible, vows to avenge Kenai by hunting it down. Kenai falls down some river rapids, survives, and is healed by Tanana (voiced by Joan Copeland), the shaman of Kenai's tribe. She does not speak the bear language, but advises him to return to the mountain to find Sitka and be turned back to normal, but only when he corrects what he had done; she quickly disappears without an explanation. Kenai quickly discovers the wildlife can talk, meeting two brother moose, Rutt and Tuke (voiced by Rick Moranis and Dave Thomas, in a send-up of their famous characters Bob and Doug McKenzie). He gets caught in a trap, but is freed by a chatty bear cub named Koda (voiced by Jeremy Suarez). The two bears make a deal: Kenai will go with Koda to a nearby salmon run and then the cub will lead Kenai to the mountain. As the two eventually form a sibling-like bond, Koda reveals that his mother is missing. The two are hunted by Denahi, who fails multiple times to kill Kenai, still unaware that he is his brother. Rutt and Tuke run into the bears multiple times, the group hitching a ride on a herd of mammoths to quicken the pace to the salmon run, but the moose are left behind when the bears move on. Kenai and Koda escape Denahi again and reach the salmon run, where a large number of bears live as a family, including the leader Tug (voiced by Michael Clarke Duncan), a grizzly bear. Kenai becomes very much at home and content with the other bears. During a discussion among the bears, Koda tells a story about his mother fighting human hunters, making Kenai realize that the bear he killed was Koda's mother. Guilty and horrified, Kenai runs away, but Koda soon finds him. Kenai reveals the truth to Koda, who runs away, grief-stricken. An apologetic Kenai leaves to reach the mountain. Rutt and Tuke, having fallen out, reform their brotherhood in front of Koda, prompting him to go after Kenai. Denahi confronts Kenai on the mountain, but their fight is interrupted by Koda, who steals Denahi's hunting pike. Kenai goes to Koda's aid out of love, prompting Sitka to appear and turn him back into a human, much to Denahi and Koda's surprise. However, Kenai asks Sitka to transform him back into a bear so he can stay with Koda. Sitka complies, and Koda is reunited briefly with the spirit of his mother, before she and Sitka return to the Spirits. In the end, Kenai lives with the rest of the bears and gains his title as a man, through being a bear.