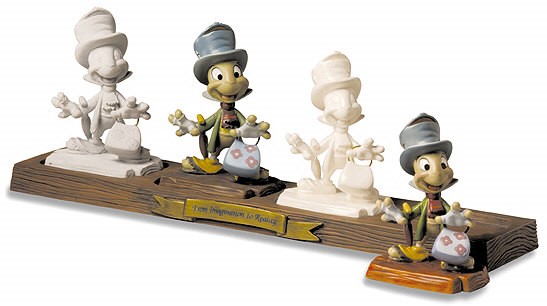 Announcing the first-ever collectors' piece to detail the steps in creating every Walt Disney Classics Collection sculpture.
2003 WDCS Members Only release. Was available 01/01/03 to 03/31/04 with Society Redemption Certificate.
Included are the resin, painted resin and whiteware stages, plus the base with a fourth space for the 2003 Membership Gift sculpture.
Edition closed 03/31/03.
(Note: Jiminy Cricket Member Gift Sculpture in foreground is not included. The Member Gift is a separate purchase)
Jiminy's Bag Handle: Bronze.