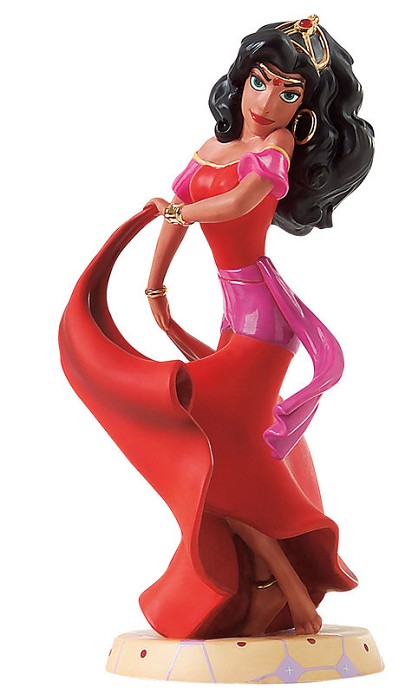 Esmeralda: Esmeralda lives the life of a Gypsy. When she dances, the coins of many admirers fall at her feet and the hearts of men are filled with desire. Then one day she dances into danger, and only the walls of Notre Dame can save her from certain death. Esmeralda is a bit different from the past heroines. She's a little bit physically stronger and tougher. And yet, because she herself is an outcast and has been discriminated against, she has the capacity to sympathize and relate to Quasimodo as no one ever has before. Esmeralda and her pet goat, Djali, live by their wits on the streets of Paris. The soldiers Judge Claude Frollo has ordered to rid the city of Gypsies are always a heartbeat away. Phoebus, the Captain of the Guard, clops down the cobblestones on his horse, Achilles. He tosses a gold coin into a beggar's hat. When he looks a second time, he sees that the beggar is actually a beautiful Gypsy girl in disguise -- Esmeralda!

Quasimodo: An orphaned baby named Quasimodo, which means "half-formed," is found by Frollo, who hides him in the bell tower of Notre Dame, the highest point in all of Paris. There Quasimodo grows into a young man, whose job is to ring the cathedral's giant bells. He has never seen the world, and the world has never seen him. Quasimodo's only friends are the stone gargoyles and the birds who live with him in the tower. One day, he takes a baby bird in his strong hands. "Will today be the day?" he asks the bird hopefully. "Are you ready to fly?" The bird flies! Quasimodo waves goodbye with an ache in his heart. He wants to be free like the bird ... Quasi is a bit like a child who just wants to go to the party but is having a real problem with his parents. Clearly, he's someone who's had a very limited experience of life. And even though he's had to deal with lots of abuse, he has an indomitable spirit and refuses to be put down.

Frollo: The ultimate authority figure, Judge Claude Frollo rules Paris by fear and force. He seeks to destroy the Gypsies. But Frollo cannot destroy the spirit that burns within Quasimodo, the mysterious bell ringer of Notre Dame. Shakespearean actor Tony Jay brings his commanding presence to an elegantly evil performance as the menacing Frollo, who serves as Quasimodo's reluctant and repressive guardian and the catalyst for many of the film's dramatic events. Frollo has a rare sophistication and makes an unusual Disney villain, who seeks neither wealth nor power (because he already possesses both) but rather the affections of a beautiful Gypsy woman. Frollo is a tragic figure who is doomed by his own sense of self-righteousness and obsession for control. With a dry sense of humor and archness, he rules over Quasimodo, getting him to believe he owes his life to Frollo. Only we know that he's right ... but not for the reasons he says. He refuses to allow Quasimodo any happiness or freedom. Instead, he keeps Quasi locked away in the bell towers of Notre Dame ... away from life and the truth.