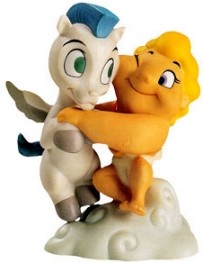 Hercules Pegasus and Baby Hercules A Gift From The Gods Ornament