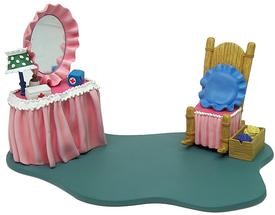 Fall of 1999 saw the release of Minnie Mouse, Pluto and Figaro from "First Aiders". The scene depicted "nurse" Minnie getting ready for the war with a very 'helpful' Figaro nearby and Pluto. A resin base featuring Minnie's vanity and rocking chair with box of yarn was released in February 2000 to complete the scene.

Mirror: A high quality mylar was used so it has the look of a real mirror.

Base does not include a Certificate of Authenticity (COA).