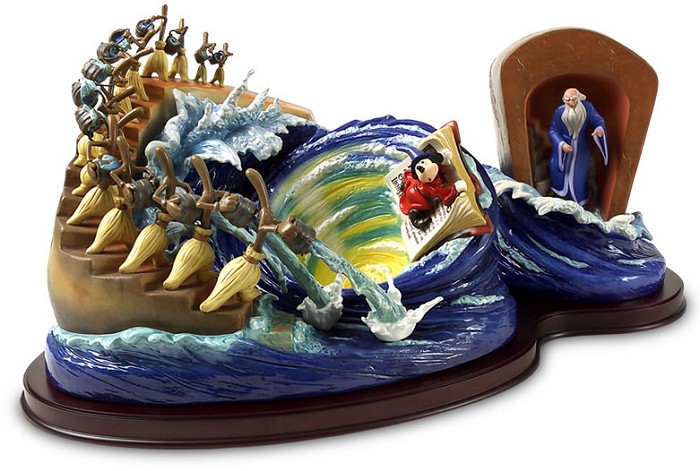 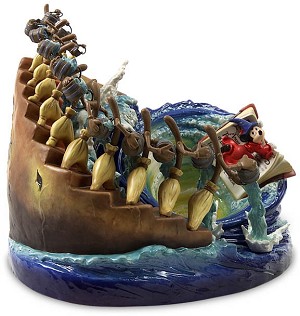 Artist: Ruben Procopio.
Introduced: 2006.
Sizes: height Mickey & Brooms: 10-3/4", Plus Base 11-3/4" height Yen-Sid: 10"
Sold as a set.
Each of the brooms was individually sculpted (and not replicated in production) and the sculpture shows an animation progression from this classic film sequence.
If you freeze a moment of the film, you will see all the brooms in unison in the same pose pitching the water from the pails. That's much easier to produce of course since you can replicate the same broom sculpture in different sizes for the sculpture.
n this sculpture however, it was chosen for the first time in WDCC to animate a progression of a film sequence showing the brooms from the moment when they start to pitch the water from the pails to the point where water is pouring all the way out. This tells the animated story of the brooms action sequence. So, each broom is sculpted individually in the progression taking many more days to sculpt and produce),but what one might expect from a Signature Series release!
The Fantasia Signature Series also comes with wooden presentation base (not shown)and a signature card signed by sculptor Ruben Procopio.
Matched Numbered Limited Edition (NLE) set of 1,000.