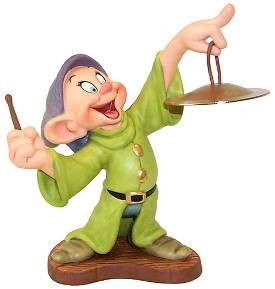 Plussing:
Cymbal & Striker: Dopey holds a porcelain striking stick in one hand and an antique-looking brushed gold cymbal by a leather cord in the other.
Buckles & Buttons: Buckles and buttons on Dopey's green jacket are sparkling gold.
Ears: Ears are oversized, adding to his silly look.