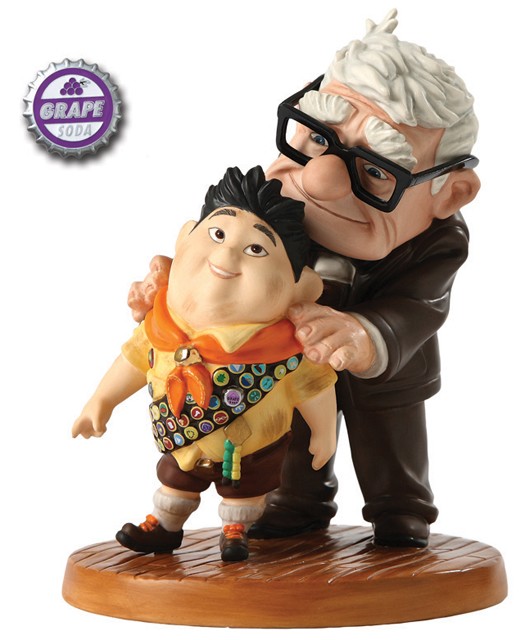 At long last, eager Russell has earned the final badge (Assisting the Elderly) he needs to graduate to Senior Wilderness Explorer. Honored to celebrate this important achievement with Russell is his unlikely explorer companion Carl Fredricksen, who salutes the boyï`s heroics with his own heartfelt award. This Ellie Badge reaches way back to the very first things we saw in the film. Itï`s like Ellie brought Carl in and befriended him, and now heï`s doing the same thing with Russell," stated Up co-writer Bob Peterson. Carl wears pewter eyeglass frames with acrylic lenses and Russell has a pewter clasp on his neckerchief. Just as Carl bestows upon Russell the greatest honor of all " the Ellie badge " a special Ellie Grape Soda pin is included, making this a moment of true merit.

Up is a 2009 American 3D computer-animated comedy-adventure film produced by Pixar Animation Studios and directed by Pete Docter. The film centers on an elderly widower named Carl Fredricksen (voiced by Edward Asner) and an earnest young Wilderness Explorer named Russell (Jordan Nagai). By tying thousands of balloons to his home, 78-year-old Carl sets out to fulfill his lifelong dream to see the wilds of South America and to complete a promise made to his lifelong love. The film was co-directed by Bob Peterson, with music composed by Michael Giacchino. Docter began working on the story in 2004, which was based on fantasies of escaping from life when it becomes too irritating. He and eleven other Pixar artists spent three days in Venezuela gathering research and inspiration. The designs of the characters were caricatured and stylized considerably, and animators were challenged with creating realistic cloth. The floating house is attached by a varying number between 10,000 and 20,000 balloons in the film's sequences. Up was Pixar's first film to be presented in Disney Digital 3-D. Up was released on May 29, 2009 and opened the 2009 Cannes Film Festival, becoming the first animated and 3D film to do so. The film became a great financial success, accumulating over $731 million in its theatrical release. Up received critical acclaim, with most reviewers commending the humor and heart of the film. Edward Asner was praised for his portrayal of Carl, and a montage of Carl and his wife Ellie aging together was widely lauded. The film received five Academy Award nominations, including Best Picture, making it the second animated film in history to receive such a nomination, following Beauty and the Beast (1991)