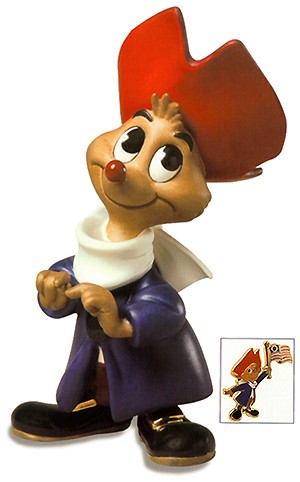 Ben and Me was Disney's first animated two-reel short subject and released theatrically on November 10, 1953. It was adapted from the children's book written by author/illustrator Robert Lawson and first published in 1939. Though both book and film deal with the relationship between a mouse and Benjamin Franklin, the book, with illustrations by Lawson, focused more heavily on actual historical events and personages. The short received an Academy Award nomination for Best Short Subject. [1] It was released on VHS under the Walt Disney Mini Classics label in 1989 and was later released on DVD as a short film in the "Disney Rarities" volume of the Walt Disney Treasures collection. It was also released on DVD in 2012 under the Disney Generations Collection. This short was also notable for being the first release on the Buena Vista Distribution label. On its release, Ben and Me was packaged with a live action short called Stormy and the True-Life Adventure documentary The Living Desert. When Disney's regular distributor RKO Pictures resisted the idea of a full length True-Life Adventure, Disney formed his own distribution company to handle future Disney releases