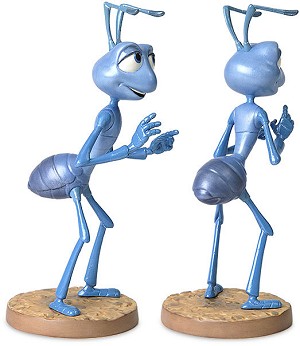 As an option you may also pay for WDCC Disney Classics A Bugs Life Flik Inverterate Inventor using Paypal Checkout. Please note that all orders must be delivered to a physical address verified by Paypal. This PayPal option is not applicable to orders to be delivered to Military or International orders.

P.T. Flea: The owner of "P.T. Flea's Circus," this quintessential schmoozer is always on the lookout for the next best act, the next best deal, the next best anything. That's why, in a desperate attempt to save his circus, he invents an act called "Flaming Death." What's a few third-degree burns when there's money to be made?

Heimlich: He's big. He's green. He's ... Heimlich! This roly-poly performer is always on the lookout, trying to find a good snack and trying NOT to become one! Though he may look like a real pushover, Heimlich has a heart of gold and nerves of steel. He'll gladly use his plump, juicy body as a decoy if it means saving a friend. His girth may get him into a few tight spots, but inside this creepy, crawly circus star is a beautiful German butterfly.

Francis: Francis, the ladybug, can't understand why everone assumes he's a girl. Francis may look dainty on the outside, but he's as tough as nails on the inside. Despite misunderstandings about his gender, Francis keeps on performing as part of the clown trio in P.T. Flea's menagerie, even if this means having to ward off unwanted advances from audience members!

Rosie: Don't be fooled by the black widow's creepy reputation: This spider equestrienne and her trusty beetle steed, Dim, are a mild-mannered pair.

Slim: This walking stick often plays the voice of doom, but when the going gets tough, Slim can be counted on to come through for his friends.

Manny: Manto the Magnificent is a pompous praying-mantis magician who prays for a return to the good old days when audiences responded to his act. Self-absorbed and a bit of a hack, this faded star still thinks he's got the magic touch and is assisted in that illusion by his moth mate, Gypsy.

Fink: While the other ants work away, Flik spends the harvest inventing ways to do things better. With a little support from the colony, he just might succeed. But if there's one thing Flik doesn't have, it's admirers! When our hero's popularity ratings hit an all-time low, Flik makes bigger promises than ever before. Before he knows it, the fast-talking ant has convinced a band of circus bugs to pretend that they are warriors. He has the young queen Atta thinking he's a big, strong hero. And his entire colony believes he can free it from grasshoppers forever!

Hopper: Jumping at the chance to be cruel, Hopper and his bully "biker" gang annually extort the food that the ants work so hard to collect. Hopper is embarrassed by his species' low station in life and manipulates the colony into believing that ants are meant to serve grassppers. Like Hopper says, "It's a bug-eat-bug world."